The secret origin of Comic Book Crisis (part one)

This first article appeared on my Patreon page. If you would like to see more behind-the-scenes articles like this, watch exclusive videos, download print-and-play games and more, please consider joining here

Comic Book Crisis: who it is and how it came to be!  An infant board game was placed in a rocket and launched from a doomed planet before it exploded!!

I'm very excited about Comic Book Crisis but the game began as a different (but not too dissimilar) creation. As a big comic book fan, I have always wanted to make a superhero game. I've played around with making games of different genres: a skirmish game, a card game, a dungeon crawl; but none of the game concepts seemed very unique or exciting to me.

Not long after I sold Pantone the Game to Cryptozoic Entertainment, they released Mighty Meeples: pawns themed to the heroes and villains of the DC Universe. They were great looking pieces, but they had one problem... there was no game to go with them! 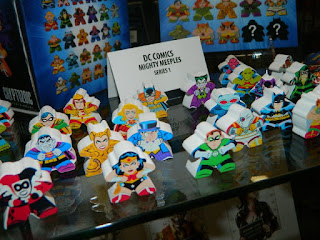 I decided that I would create a prototype to pitch to Cryptozoic Entertainment. One of the early challenges was which characters to use? The meeples were sold as sets but also blind-bagged. I wanted to include all of the characters, but there was no guarantee that a player would have them all. A core set of characters would have to be included with the game. I chose the classic DCU characters and their arch-villains: Batman, Robin, Superman, Wonder Woman, Green Lantern, Green Arrow, Aquaman and the Flash against Joker, Catwoman, Lex Luthor, The Cheetah, Sinestro, Deathstroke, Black Manta and Professor Zoom.

As they were meeples, I determined that an euro-style game would be the most appropriate. I was (and still am) fascinated with worker placement games, so that was my starting place.   I love the idea of an "Ameritrash" theme such as superheroes applied to a very "Euro" style game play such as worker placement. I particularly was excited about the visual of the meeples being placed on a comic book. I put together a prototype pretty quickly. 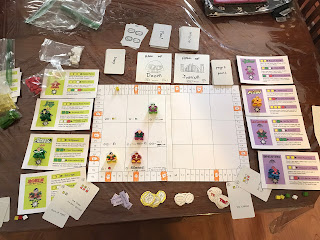 In the game, players would recruit a team of heroes and place their meeple onto a comic book panel to collect resources and rescue citizens.

Some of these resources should look familiar to you... 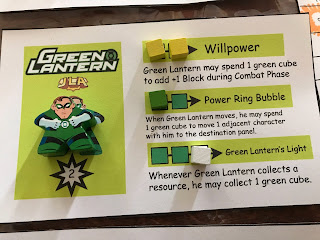 The resources would be used to level-up the heroes powers so when they were placed again on the comic, they would have better abilities. 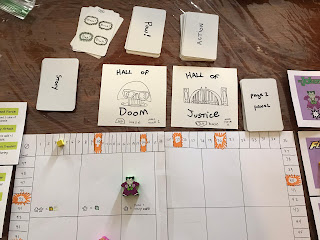 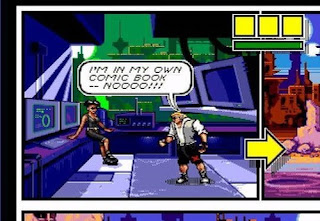 I initially wanted the players to "move" the heroes and villains on the comic book like how the player moves across the comic in the classic Sega game: Comix Zone. 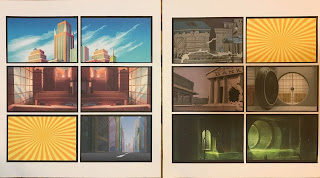 My first attempt at a comic book board ended up looking more like storyboards than a comic book to me. (The yellow "sunburst" panels were wild card panels where any type of resource could be collected.) I didn't want players to be playing on a map, I wanted it to feel like a comic book page! (although at one point, I did consider using a city map - but I felt it distracted too much from the "play on a comic book" concept.)

Next, I considered the comic to be composed of randomly drawn "panel" cards that would create the comic book board, but I didn't like that it just ended up making an incoherence and random jumble of a story. It felt more like a puzzle. Determining which panels to play where took up too much of the player's bandwidth. I wanted the player's concentration to be on worker placement. 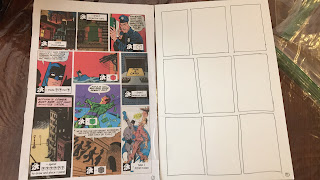 I went through dozens of comics to find images to turn into some sort of "story" for my comic book board. I decided the first half of the board would be a pre-printed comic book story and the players would still have to purchase panels for the second half. However, this didn't turn out to be such a good idea, so instead, I used the panels as a timer than would count down until the end of the "story". Visually, I still wasn't satisfied with this version. I didn't like how the resource boxes took up so much of the panel's space. I wanted to see the comic book art, not instructional boxes! 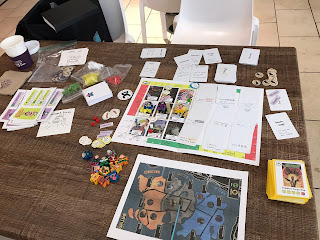 I playtested this version a few times. In the game, heroes would race through the city, collecting resources to complete famous story lines from DC comic books. It was overly complicated with too many boards and cards to keep track of.

It was about this time that I pitched the game to Cryptozoic. Unfortunately, due the conditions of their contract with DC, I learned that they couldn't use the Mighty Meeples in a game. (which I still feel is a shame) But I was captivated by the core concept of a "worker placement game on a comic book". How could I make this game work? Without the DC comic characters, what was I to do?!
Then inspiration struck again... 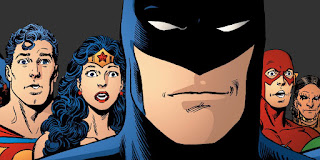 To be continued... at https://www.patreon.com/ScottRogersDesigner


Posted by Scott Rogers at 9:42 AM No comments: 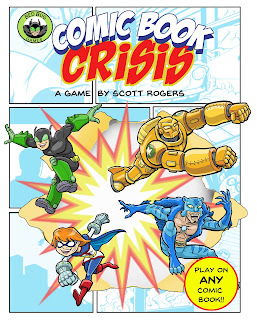 After asking you your opinion, I got some great feedback and have put together the cover for Comic Book Crisis (for now - I reserve the right to adjust and revise as things move forward!)

And here it is as a "mocked up box cover." 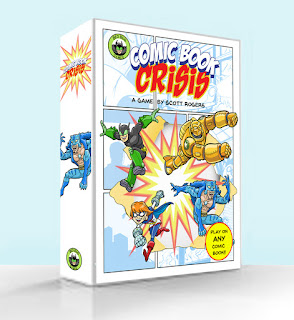 I think it looks pretty good! Thanks to everyone who chimed in on which cover they preferred!

Onward and upward!
Posted by Scott Rogers at 6:17 PM No comments:

I'm designing and improving the cover of Comic Book Crisis. Which version do YOU prefer? 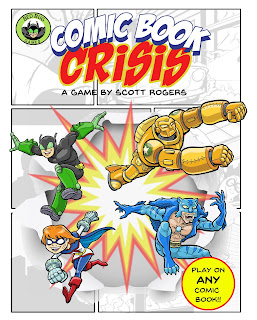 VERSION A: which the heroes all bursting out of the torn comic book page 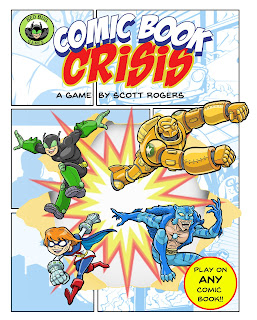 VERSION B: Where that cover is colorized

Please vote in the comments below and thanks!

Posted by Scott Rogers at 12:50 PM No comments:

While you can play Comic Book Crisis with any comic book, this exciting new board game comes with four original superheroes that you use to play the game! 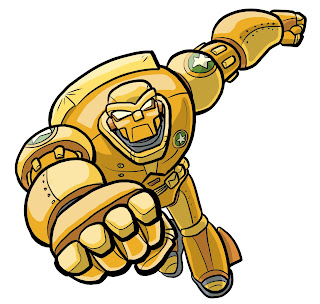 The final member of the B-Team is the Bronze Bombshell, the armored hero who packs a powerful rocket-powered punch!

A fourth generation soldier, Rochelle Jackson wears the vintage armor of the BRONZE BOMBSHELL to battle all threats to her home of Silicon City. `Shell is an expert pilot, a skilled mechanic, a clever tactician and a natural leader!

Bronze Bombshell is one of the brand new characters who will be debuting in Comic Book Crisis #1, the exclusive comic that comes with the game! All of this great artwork was created by comic book artist Aidan Casserly. Check out his comics here! Check out some of the concept art for Bronze Bombshell drawn by me! 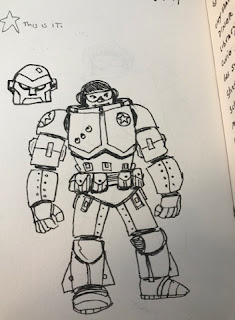 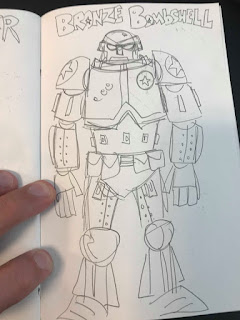 Posted by Scott Rogers at 8:40 AM No comments:

While you can play Comic Book Crisis with any comic book, this exciting board game spotlights the four superheroes who make up "The B-Team"! 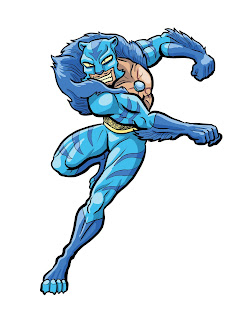 When adventurer Jack Driscoll traveled to India in search of the mystic Blue Tiger Sapphire, he found more than he bargained for. He ran afoul of a cult who fused him with the magical gem; unintentionally giving him supernatural cat-like agility and healing abilities. The Blue Tiger Spirit that resides within the gem compels Jack to do good, despite his salty nature. Sometime around the 1940’s Jack started dressing as the BLUE TIGER to fight crime and hasn’t stopped since. 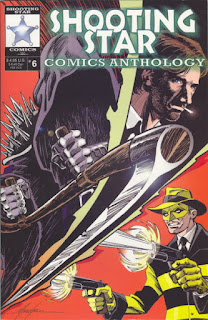 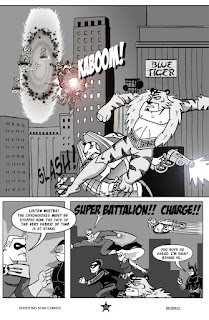 The Blue Tiger first appeared in Shooting Star Comics #6 as a member of another team: the Super Battalion. His appearance was brief as he pitched in fighting against an invasion from another dimension. 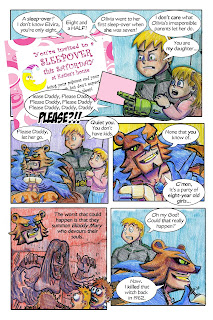 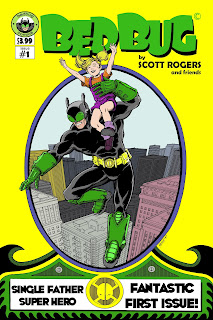 Blue Tiger returned in Bedbug #1 to help Bedbug thwart a crime wave by Bedbug's fiercest foes. (but he mostly just played a lot of video games) 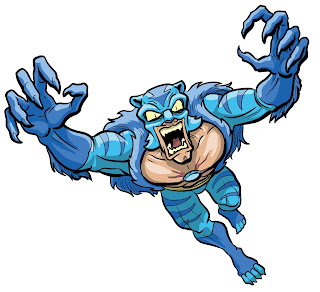 In Comic Book Crisis, Blue Tiger is drawn by comic book artist Aidan Casserly whose work you can check out here! I'll leave you with a few sketches of Blue Tiger by yours truly. 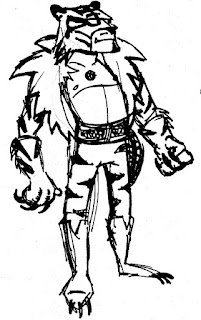 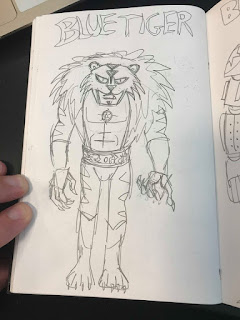 Posted by Scott Rogers at 8:28 AM No comments:

While you can play Comic Book Crisis with any comic book, this exciting board game spotlights the four superheroes who make up "The B-Team"! 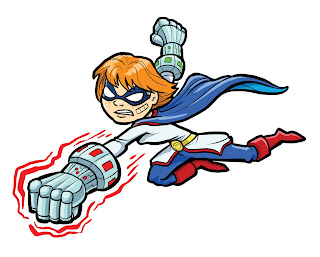 Elizabeth “Betsy” Battle was born with incredible strength and invulnerability. Even at a young age, she could rend metal and shatter cinder-block with her bare hands! 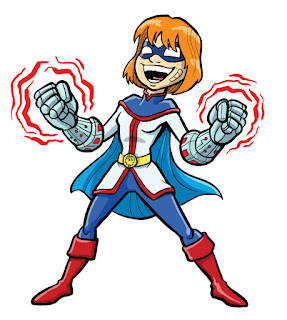 In an attempt to give her a normal life, her inventor father created gloves that inhibit her strength but in the guise of BATTLE BELLE she is finally able to cut loose and use her powers to their full potential while helping the citizens of Silicon City. 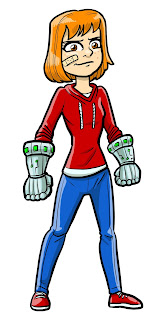 Battle Belle is a brand new character who will be debuting in Comic Book Crisis #1, the exclusive comic that comes with the game! All of the above artwork was created by comic book artist Aidan Casserly. Check out his comics here!

In anticipation of her arrival, here are a few sketches by myself that led to her creation! 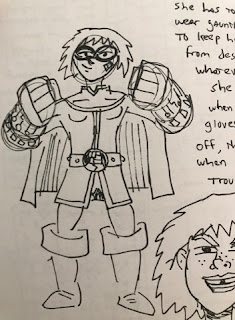 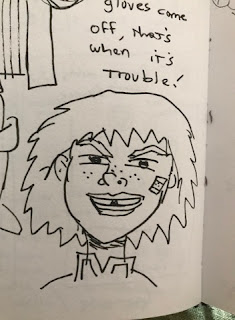 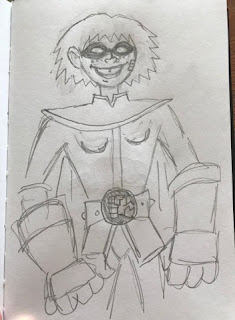 Posted by Scott Rogers at 7:05 PM No comments:

We love your mail!